Bramcote College is a member of The White Hills Park Trust.

Special consideration for all year groups

Special consideration may be given to applications that are supported by written evidence from a doctor, social worker or other relevant professional giving reasons why the school is the only school which could cater for the child’s particular needs. This might include medical needs, mobility support needs, special educational needs or other social circumstances. The evidence must be presented at the time of application. The Directors will consider the written evidence provided to decide whether the application may be processed as special circumstances. Admission under special circumstances will have priority over all but the first numbered criterion.

The White Hills Park Trust have adopted the Home Local Authority’s stance on Fair Access Protocols. Local Authorities are required to have Fair Access Protocols in order to make sure that unplaced children who live in the home local authority, especially the most vulnerable, are offered a place at a suitable school as quickly as possible. This includes admitting children above the published admissions number to schools that are already full.

In the event of oversubscription, the following criteria will be applied, in priority order, to decide which applications will be granted once places have been allocated to pupils who have a statement of special educational needs or an Education, Health and Care Plan which names the school provided that the school can meet their needs:

In the event of oversubscription, within any criterion, preference will be given to children who live nearest to the school as the crow flies. Distances are measured from the main administrative point at the school campus to an address point (using eastings and northings as defined by Ordnance Survey) to the child’s home using the local authority’s computerised distance measuring software.

The School Admissions Code 2014 states that all admission authorities must give the highest priority to this group of children and provides the following definition:

A looked after child or a child who is (a) in the care of a local authority, or (b) being provided with accommodation by a local authority in the exercise of their social services functions in accordance with section 22(1) of the Children Act 1989 at the time of making an application to school.

Admission authorities must give highest priority to children in care in their admission oversubscription criteria.

Informal arrangements between parents will not be taken into consideration. The Directors may also seek proof of residence from the courts regarding parental responsibilities in this matter.

For families of service personnel with a confirmed posting to the area or crown servants returning from overseas to live in the area, the Directors will accept a unit postal address or quartering area address for a service child.

In all cases all those with parental responsibility must be in agreement with the preferences made.

In the event of two distances being equal, lots will be drawn and independently verified.

How do I appeal?

If a student has been refused a place, parents have the right to appeal against the decision which will be heard by an Independent Appeal Panel. If you wish to appeal, you should telephone Karen Sims, Clerk to the Governors on 0115 9168900. Any appeal must be lodged within 30 school days of the receipt of the letter.

Waiting lists are held where the number of applications received is greater than the number of available places in the intake year group. The order of places on a waiting list is decided by the admission oversubscription criteria for the school. No reference will be made to the date we receive your application or whether you have chosen to appeal. Your position on a waiting list may change if any late applications are received which have a higher priority within the admission oversubscription criteria. These applications will be placed higher than those who have been on the list for some time, this is in line with the coordinated scheme. If your child is offered a place at a higher preferred school, their name will be removed from any waiting lists for lower preferences. The waiting list will be maintained for the remainder of the current academic year.

The White Hills Park Trust will notify the LA when to write to offer a place to the applicant at the top of the waiting list if the number of allocated places falls below the published admission number for the school. Children’s names will only be added to a school’s waiting list if they are refused a place.

Late applications received from the closing date up to the date specified within Nottinghamshire’s coordinated arrangements will be dealt with in accordance with the scheme. They will be considered as on time if the applicant can provide evidence that there were exceptional reasons for missing the closing date, for example family bereavement, hospitalisation or family trauma. Applications received after that date will be considered as late and processed after the national offer date.

Application for Places outside the normal age group

Parents may seek a place for their child outside of their age group. For both primary to secondary transfer and in year admissions parents should submit a request in writing to their Home Local Authority’s school admissions team as early as possible. In all cases decisions will take into account the age group the child has been educated in up to that point and will be made on the basis of the individual circumstances and in the child’s best interests.

The person making the application must hold parental responsibility.

The catchment area for Bramcote College is shown in the shaded area north of the A52 in the map below:
(Click to enlarge) 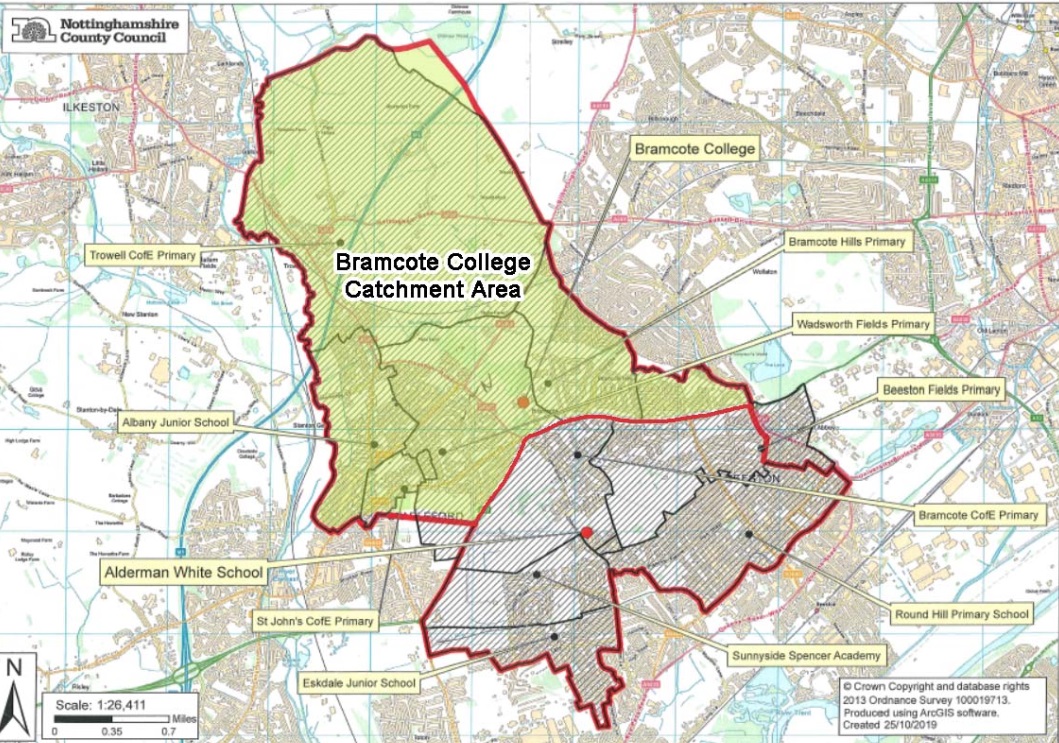 Where one child of a multiple birth can be admitted, the other child/children will also be admitted.
The Trust works with the LA for in year applications. Applications should be made through Nottinghamshire County Council.

The PAN for Bramcote College is 120.

There are no entry requirements to join Alderman White Post 16 facility (Bramcote College Sixth Form). However, for study at Level 3 (A level and its equivalents), at least a minimum of 5 GCSEs of grade 5 or above is required.

Some subjects have additional entry requirements.

Up to 60 places are offered to students who would be joining the Trust in Year 12.  In the event of over-subscription, the following criteria for admission into Year 12 will apply:

In the event of oversubscription, within any criterion, preference will be given to children who live nearest to the school as the crow flies. Distances are measured from the entrance to the child’s home to the principal entrance of the main administrative building of the school, using the County Council’s distance measuring software.

The appeal system and waiting list will also apply.